This website originated from an idea to offer guided tours for Germans in Sweden and Scandinavia some years ago, so that’s why it is in German. This project never made it to daylight, but the website grew over the years. In 2016 I had to change my provider and started renovating everything, so now nordicbiker.se 2.0 is slowly growing again. Now I would like to add some of the information also in English. I hope you understand that for me as a non-native English speaker it would be too much of an effort to get the complete content translated. I will cook it down to the most important information. Please don’t hesitate to contact me by email if you have more specific questions:

The landscape and the weather

Recently I read a comment on an article about motorcycling in Sweden, where a guy complained about the boring roads and landscapes he encountered Sweden and called his vacation here a wast of time. This really surprised me – where was this guy riding? Was he really in Sweden?

Ok, Sweden is not as spectacular as Norway, admitted! If you like mountains and are looking for hairpin roads, in southern Sweden you would be at the entirely wrong spot. Coming from the south, Skåne will greet you with endless wide views and small  paved roads. Then in Småland there are rolling hills, the landscape changes constantly from between woods and open areas. Coming further north, you will experience endless woods with only few villages, but even more lakes. And finally the landscape gets more and more ”nordic”, the population drops even more and once you have reached Jämtland & Härjedalen there WILL be mountains! So quite a nice mix of different landscapes, all within a few days drive from each other.

And then there is of course the weather: while in summer the south of Europe is almost unbearably hot, in Sweden you will find motorcycle-pleasant temperatures between 20 and 25 degrees, sometimes more close to 30 but hardly ever above. From my point of view it can’t get better if you ride according to the rule: All the gear, all the time! I remember a day ridging through Bologna in Italy at 35 degrees (this was in May!), stop-and-go traffic. Never again! The further north you get in Scandinavia the more you need to be prepared for sudden weather changes and even snowfall in August is not impossible in the far north at higher elevations. So best riding gear would be some membrane-equipped waterproof jacket and pats, which still allow for some ventilation, combined with some light gloves and a second pair of waterproof gloves and waterproof motorcycle footwear. Personally I prefer laminated materials (three-layer Goretex) as they are used by Finnish brand Rukka: they don’t soak up any rainwater and are quickly dry again.

Best time for motorcycle riding in Sweden is May to September. In April some gravel roads still might be snow covered (more on that below) and in October days are getting quite short and much cooler. The greatest time is in June around midsummer, when even as far south as Stockholm it does not really get entirely dark at night. And once you get above the arctic circle the sun won’t drop below the horizon, so I like using an airplane sleeping mask to darkness into my tent!

A good source for a weather forecast:

Then there are the bugs…

Yes, they can be really annoying.

Yes, they want your blood!

So hopefully there will be some wind, try to find some exposed spot for your tent. There is basically only one method that will prevent you from getting mad, if it really gets bad: cover your head with a mosquito net and wear some kind of baseball cap under it, to keep a distance to the skin. Otherwise there is only chemical warfare left as a second method of choice. Get some local bug repellant, this works best. However the very worst bug situation of my lifetime I did not encounter in Scandinavia, but in Ontario, Canada. So yes, it could get worse! 😉

The worst area when it comes to biting bugs is actually not the far north, but Färnebofärden National Park around Gysinge about 1.5hours drive north of Stockholm!

Sweden has it all!

There are a few motorwayslike the E4 along the east coast and the E6 along the west coast with two lanes in every direction, which I personally try to avoid and only use if I really quickly need to cover some distance. Normal countryside roads have little traffic. It gets even better once you get to secondary roads, winding theselfe throughout the woods. However your average milage will drop significantly. And then there are tens of thousands of kilometers of unpaved roads and logging roads. Not so many years ago even major roads were not paved, because they withstand the harsh climate much better than badly build paved roads. They are graded once a year, then traffic will compact the loose material again. Many times well maintained gravel roads are smoother to ride than badly maintained paved roads! And the best part is: most of those gravel roads are open for public traffic. Many landowners (some times large forest companies) are setting up signs like 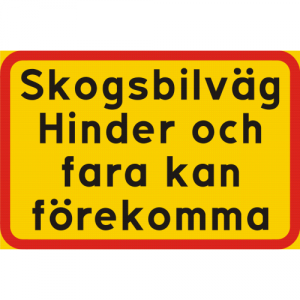 which basically means: you are using this road on your own risk. Consider yourself informed that there might be obstacles (fallen trees, deep potholes, large stones, deep loose gravel) on the road. And don’t blame the land owner if you crash – adapt your speed to the state of the road. Private land owners get subsidized by the state to maintain public access roads, and if they get money from the state they are required to keep them open. However in early spring after snowmelt you sometimes find roads closed, which is done to prevent heavy vehicles from leaving deep tracks. For a week or so these roads are hardly passable not even by bike, but most likely you won’t be here that early in the year.Sometimes you find signs closing roads for public traffic, but this is questionable because most likely the owner IS still getting state money.

This is actually a funny one:

Bumbs all along the f…ing road! 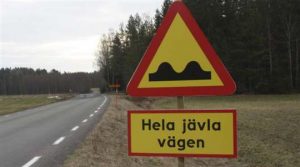 There is an ages old rule in Scandinavia (Norway, Sweden, Finland) still in place called Allemansrätten, which allows everybody to cross over private land by foot, bicycle, horseback, skis and boat. This does NOT include motorized traffic! Basically it means you can roam freely, but you need to keep away from the near surroundings of houses, you are not allowed to walk through gardens and you need to keep away from plantations where you could do damage. You are also allowed to camp for ONE night on private land, away from sight of any house if you are careful not to start a wildfire and take all your trash with you. Basically there shouldn’t be and trace of your presence once you have left. Many times you can find beautiful spots on lake shores and sometimes there are even primitive wind shelters available, build for people who want to do some fishing (which is only allowed after you bought a local license). In nature reserves and national parks are often exempted from Allemansrätten, so get informed!

Motorized traffic is not allowed offroad. With ”offroad” I mean everything which is not a track or path which was purpose-build for vehicular traffic. This is clearly regulated by law (Terrängkörningslagen). By this definition hiking and riding paths are off-limits, as are tractor tracks left after the landowner pulled some trees from his property. And of course you are not allowed to drive cross-country straight through the woods, open fields, grassland, or moors. Not even the landowner himself is allow to drive offroad for fun on his own property, if it is not required for agriculture of forrest usage. Only in winter, when the snow cover protects the ground, you are allowed to use a snow scooter almost anywhere.

Please respect those limitations on road and land use, so that we all can keep the Allemansrätten alive for many more generations. Also please show respect for other people on the road, like those elderly couple walking their dog on a sunday morning. Slow down significantly, don’t spray gravel. Most times people react very friendly and positively if you stop for a short conversation. Almost everybody, even older folks, will normally speak good English!

Special care needs to be taken if you encounter horseback riders. Horses have a natural instinct to flee from dangers and they really don’t like motorcycle exhaust noise. So hold your finger on the red button, ready to kill the engine if the horse gets nervous. It’s then up to you to communicate with the rider to find a solution for a save passage. I still have the opinion that a responsible horse owner should take out his animal on public roads only if it is able to tolerate a certain amount of noise and traffic stress (police horses are specially trained for that!), but the last thing we want is a headline in the newspapers about a 16year old girl hurt badly when she fell off her horse because of a motorcycle rider passing without care.

If you come to Sweden quite late in the year (September in the northern part, October in the south) the moose hunting season will have started. A good sign that something is going on in the woods are cars with male passengers in hunting clothes wearing bright orange caps or maybe a bunch of cars parked in the middle of nowhere. Sometimes there are also warning signs set up if hunting dogs are off-leash.

Hunt with loose dogs in progress: 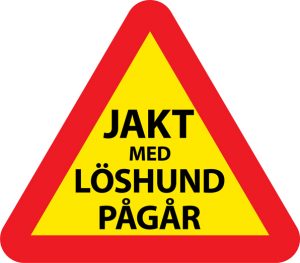 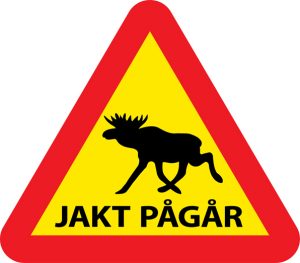 If you are in doubt, ask the locals if it is a good idea to use a specific road during moose hunting season. You will (probably) not be shot at, but you are for sure not making friends if you chase away the moose. Moose hunting in Sweden is as import as Christmas, Easter and grandpa’s birthday – all combined! Many active hunters specifically take vacation for that, so please respect some limitations during this time of the year.